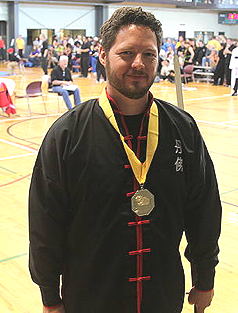 Most people know that Tai Chi is an ancient Chinese exercise system that uses slow, smooth body movements to achieve a state of relaxation of both body and mind. These are the well known benefits of Tai Chi:


What most people don't know is that Taijiquan (modern Pinyin spelling that replaced the Wade Giles T'ai Chi Chuan spelling) was originally a fighting style. The applications of Taijiquan are not done slowly or softly. They are fast, direct, and brutal. They do of course "borrow" the energy of the attack and turn it against the attacker, but this is common in many martial arts. Some arts, like Aikido and Taijiquan, are just better known for this concept. It is only through push hands practice, and specific training of the applications that Taijiquan becomes an effective, functional martial art.

Instructor Bradley Ryan has over forty years of ongoing study in traditional and modern martial arts, and has been trained by Tai Chi Masters from China, Taiwan, and the United States.