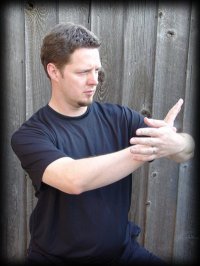 I think it is important to post my bio so people can gain some insight into the kind of martial artist that I am, and where I am coming from. My involvement in the martial arts was first and foremost as a means of self-defense. Although I had seen martial arts in movies and on television, I clearly understood at an early age that there was “Hollywood” fighting, and “real” fighting. This is important to note, because many martial artists (even so-called “Masters”) do not differentiate between the two. When it comes to teaching, I do not want to portray the martial arts as being pretty or fancy techniques that can make the small guy impress or intimidate an attacker. No, on the contrary, my experiences are that “pretty” or “intimidating” techniques aren't the ones that really work. The best techniques are simple, quick, and brutally effective against an attacker.

A friend's older brothers first introduced me to the martial arts in 1972. They were streetfighters that liked to test out the Karate, Kung Fu and Jujitsu they were learning in the neighborhood dojos in alley fights and other situations. This of course was to my benefit as a student. To be sure, this was not traditional martial arts training. I was not learning a specific system, but definitely the “Neighborhood Style”.

In 1980 I joined my first traditional dojo where I learned Wado Ryu, a Japanese style of Karate, under Sadaharu Kurobane. Over time I earned my blue belt, but due to my insatiable appetite for martial arts I left that dojo in search of the “best” martial art. I trained in Wrestling from an ex-Olympic wrestler. I studied the “softer” arts of Aikido and Tai Chi Chih. I was also introduced to American Kenpo and Boxing. During this time, my friend was teaching me the Shaolin Kung Fu he was learning, and I was sharing with him all of the things that I had learned. I got the teaching bug at this time. I found that I really enjoyed teaching and was already entertaining thoughts of doing this for a living.

The years had passed and I was now in High School (1982). I took two busses across town to learn Wun Hop Kuen Do, a Kung Fu style. I then tried Chinese Kempo. I was in the Fencing club in High School. I finally realized that my search for the “best” style was a foolish one. If there was a “best” style, everyone would be taking it. I then decided to stick with one system until I at least achieved my black belt.

There was a dojo in the neighborhood that taught Shotokan Karate. Shotokan is another Japanese system, taught in a very traditional manner. My sensei was Dennis G. Palumbo. In October of 1986, I earned my Shodan (1st degree Black Belt) in Shotokan. One of the benefits of training under Palumbo was he would often travel to teach seminars, leaving me in charge of the Karate classes. This gave more time to hone some teaching skills.

Also in 1986, I started learning Arnis de Mano from my good friend Edwin Aya. Arnis is a Filipino martial art that emphasizes fighting with sticks and knives. In exchange for Arnis lessons, I taught Edwin some of the martial arts I knew.

In 1989 I moved to Los Angeles, and continued my study of Shotokan under Hiroyasu Fujishima (a 7th Dan from Japan). The level of training was much higher than what I was used to, so needless to say my Karate improved.

Upon arriving back in Denver in late '89 I continued my study of Arnis with Edwin, and still trained in Shotokan. After a while I got restless for something different, so Edwin and I started training in Capoeira. Capoeira is a very acrobatic Brazilian martial art that is marked with spectacular kicks, cartwheels, flips, and is done in a circle with a partner to music. Edwin did not practice Capoeira for long, but I continued for a solid year.

During this time Edwin and I started teaching and training at a Dojo called 3-D Martial Arts. 3-D is the style of Clarence Thatch, based on his background of full-contact Karate and Jeet Kune Do (Bruce Lee's style). Edwin and I taught Arnis at 3-D. Also during this time I would meet a practitioner of Serrada Escrima (another Filipino style) named Tony Verdugo, and train with him as well. Serrada is close-range system that counter balanced the long-range Arnis that I had been learning.

In July of 1993 I moved to Seattle, Washington. On a previous visit I had met Jesse Glover and Ed Hart (both students of Bruce Lee). Jesse was Bruce Lee's first student in the United States back in 1959, and had invited me to train with his small group. I was honored, and trained with Jesse for the entire time I lived in Seattle. Jesse simply called what he taught as Non-Classical Gung Fu.

I moved back to Denver about a year later and was back at 3-D. The emphasis at 3-D was changing, and my interest was now turning back towards the traditional arts.

One day (in 1996) I came across a group that was training Gao style Ba Gua Zhang in Washington Park with Marcus Brinkman. Ba Gua is a very sophisticated, circular, internal Chinese martial art. I enjoyed the training very much, but a strange thing happened. Many of the movements I was learning were similar to movements from the Kata that I had learned in my Karate training. The only difference was the applications to these same movements in Ba Gua were very different to what I had been taught in Karate. This caused me to start digging deep into the roots of my Karate, which of course led to Okinawan Karate. Okinawa is where Karate was developed from the Southern Chinese Gung Fu systems and the native “Te” arts of Okinawa.

My quest led me to Sensei Pat O'Brien and Seibukan Shorin Ryu Karate. I trained with Sensei O'Brien from 1997 to 2004, and earned my black belt in Seibukan Shorin Ryu in June of 2002. During this time I also learned Matayoshi Kobudo (classical Okinawan weapons) with him under Rob McFarland. Although not ranked in Kobudo, I learned many different kata of the bo, sai, tonfa, nunchaku, kama, and eku, and their fighting applications.

In February of 1998 I started teaching Karate for Young Olympians Karate (now known as Young Champions Karate), an organization that offered Karate to children at elementary schools and Boys and Girls Clubs at an affordable rate. They also emphasized safety awareness and “stranger danger” concepts through such training as Project S.A.F.E (Safety Awareness For Everyone). It was during this time that my teaching skills truly reached a higher level. Teaching children is a completely different ball game, and teaching them effectively even more difficult. It takes tons of patience, creativity, and determination. Most schools make the mistake of just teaching games and the kid's classes are little more than happy fun play time with the next belt being used like dangling a carrot on a stick. I never adopted this way of teaching, or using gimmicks like merit patches or empty awards to retain my students, and I got the Highest Retention award two years in a row (2000 and 2001). I also earned “Instructor of the Year” for 2001 and “Team Player of the Year” for 2002. As a result of all of this, I was made an instructor trainer and went out unannounced to classes to do evaluations. You think it's hard giving advice to a yellow belt? Try giving advice to a black belt. I eventually stopped teaching for them around 2004 but continued as a trainer and consultant for another year.

In May of 2000, I started learning Chen Taijiquan (Tai Chi Chuan) under Mark Becker. Taijiquan is another internal, Chinese martial art, and Chen style is the oldest style of Taijiquan from which all other styles (Yang, Wu, Hao, Sun) of Taiji have come from.

In October of 2003 I studied the 24 form Taijiquan under Hong Ji until she went back to China in November of 2004. I did learn the entire 24 form as well as some Qigong over that year of training with her.

Also in early 2005 I met my good friend Mearl Thompson. A fellow Taijiquan practitioner, he also serves as my mentor. From him I have learned “Tai Chi for Arthritis” as well as some Five Animal Frolics. And I am also very grateful to Mearl for introducing me to our push-hands (tui shou) coach, Chih I-liang (Master Aaron) in January of 2007. Chih visits Denver regularly to visit his son and his family. We benefit by having him teach us his brand of push-hands. I have also learned the the Da Ba Ji form of BaJiQuan and started learning the Cheng Man-ching 37 form of Taijiquan and from Chih in the summer of 2009.

In the early part 2009 I learned Deer Boxing (Lu Quan) from Ken Cohen. This consisted of the 8 Hands of the Deer as well as the Deer form. It is an extremely rare Taoist style.

I am currently training with Sifu Tony Timmer. In my continued quest for more "functional" Taiji I met and was impressed with the Ye style of Taijiquan that Sifu Timmer teaches. The details are much more combative and practical compared to the modern day Taiji forms that have been modified for aesthetics and showmanship. As you can see, I have been a serious student of the martial arts for most of my life. A day does not go by when I am not training, teaching, or researching martial arts.